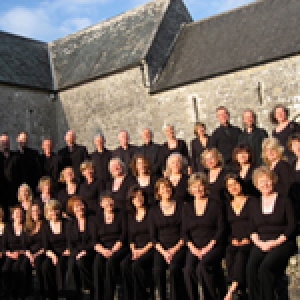 Cór Mhaigh Eo — based in Westport, County Mayo, Ireland — will perform twice in Monaco under the auspices of the Princess Grace Irish Library and Église Saint Charles:

The choir will sing during the weekly English-language mass said by Father William McCandless.

All denominations are welcome.

The link between Monaco and County Mayo: Princess Grace's grandfather - John Kelly - was born in a cottage overlooking the Leg of Mutton Lake (between Castlebar and Newport) in 1847, two years into the Great Famine. He emigrated to the United States in 1869 and married fellow Irish emigrant Mary Ann Costello in 1870. The youngest of their ten children – John Brendan Kelly, the Princess's father – was one of the most accomplished American oarsmen in the history of the sport of rowing and was a triple Olympic Medalist. In 1918, he founded a brickwork contracting company that later became one of the most successful in Philadelphia.

Cór Mhaigh Eo: In its infancy, the choir concentrated on non-competitive performances of mainly sacred works. In 2004, former bass Dr Brian Lennon took over as conductor, leading to a change of direction for the choir with a wide repertoire ranging from 16th century choral music to contemporary choral and secular works. The earliest works the singers perform are Gregorian chants. To date, in addition to Irish venues, the choir has sung in Italy, Latvia and Spain. Culture Ireland is sponsoring the Monaco events.

Dr Brian Lennon: An accomplished traditional musician himself and member of the prominent musical Lennon family of Leitrim, he plays flute, whistle and fiddle. His initial foray into choral singing was as a member of Cois Cladaigh Chamber Choir. Brian is a member of the popular traditional group Céide and the more recently formed Coda— an a cappella group. Through his expert tuition and choice of challenging and beautiful pieces, he has guided the choir to National Awards at both Cork and Sligo International Choral Festivals. Thanks to his dedication and enthusiasm, Cór Mhaigh Eo is going from strength to strength.

(The programme may be subject to change.)

Princess Grace Irish Library: The Library was inaugurated in November 1984 by Prince Rainier III of Monaco (1923-2005) as his tribute to the attachment Princess Grace (1929‑1982) felt for her Irish origins. Operating under the ægis of Fondation Princesse Grace, the Library — a thriving cultural centre — is a short walk from the Prince's Palace.

Église Saint-Charles: Saint Charles Parish serves a large community composed of 32 nationalities. This church is one of the true jewels of the Principality and is visited frequently by members of all faiths as a refuge of peace and prayerful tranquillity. Additionally, many come to marvel at the sacred artwork and the architectural beauty of the church. In 2012, the parish celebrated the Centenary of the official dedication with a variety of activities and events. Since 6 April 1950, at the request of Prince Rainier III (1923-2005), the administration of Saint Charles Parish was entrusted to a religious congregation — the Oblates of St. Francis de Sales.