GEORGE MOORE AT THE FIN DE SIÈCLE: A WORLD OF DISCOVERY 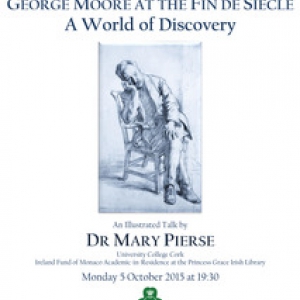 GEORGE MOORE AT THE FIN DE SIÈCLE: A WORLD OF DISCOVERY

Mayo-born writer George Moore (1852-1933) came from a very distinguished Irish family. The activities of his antecedents included 1798 involvement, Presidency of the Republic of Connacht, wine importation, historiography, nationalist politics, and racehorse concerns. Although indubitably influenced by those interests, ‘GM’ blazed his own trail in the literary world, a route lit up by his interactions with Impressionist artists in Paris, Victorian prudery in London, and cultural revival in Ireland. Moore’s innovatory literary achievements show him to be a man in touch with humanity and society, and also very much ahead of his time.

This illustrated talk will refer in particular to his 1903 collection of short stories, The Untilled Field, and to his 1905 novel The Lake.

Mary Pierse has recently taught on the MA course in Women’s Studies at University College Cork where, since 1999, she has also taught Victorian and fin-de-siècle literature, colonial literature, seventeenth- and eighteenth-century poetry at the English Department. She has held Research Fellowships (including an Irish Research Council for Humanities and Social Sciences Fellowship) at University College Cork.

She compiled and edited Irish Feminisms 1810-1930 (Routledge Major Works Series, 2010), a five-volume facsimile set incorporating novels, short stories, poetry, essays and news material, most of which had been difficult for scholars to locate previously. She is author of the George Moore entry in The Encyclopedia of Victorian Literature (Wiley Blackwell, 2015) and editor of George Moore: Artistic Visions and Literary Worlds (2006).

In 2014, Mary co-edited George Moore and the Quirks of Human Nature (with Maria Elena Jaime de Pablos) and France and Ireland in the Public Imagination (with Benjamin Keatinge). She has also co-edited (with Una Hunt) France and Ireland: Notes and Narratives (2015).

Her ongoing research interests relate to artistic synaesthesia and to Irish women writers.

Instigator of the George Moore International Conference Series, she is a board member at the National Centre for Franco-Irish Studies and serves on editorial boards and scientific committees in Ireland, France and Spain.