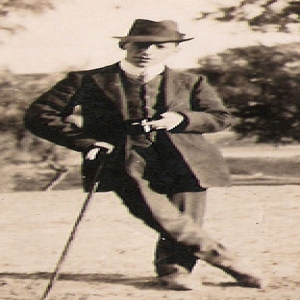 from Roquebrune to Drumcliffe

'Under bare Ben Bulben's head, in Drumcliff churchyard Yeats is laid', wrote William Butler Yeats before he died in Roquebrune Cap Martin in January 1939. Another man died there on the same day, Alfred George Hollis, great-uncle of Louise Foxcroft. The two men were buried side-by-side in the hilltop cemetery of Roquebrune Village.

Yeats had instructed his wife that he wished to be re-buried in Drumcliffe after a year… but war intevened. Hollis's remains were to stay in France. In 1948, with the war over, one of them was exhumed and taken back to Ireland. It is far from clear whose bones lie in the Sligo churchyard.

In July 2012, Louise Foxcroft came to the South of France with an Irish film crew to work on the documentary W B Yeats: No Country for Old Men which was broadcast on RTE1 in December that year. They filmed at Roquebrune, Menton and at the Princess Grace Irish Library. The documentary opens up a new biography of Yeats using the story of the burial and exhumation as a metaphor for the poet's less familiar side. Rather than the high rhetoric of his poetry, his dramatic masks and statesmanship, it looks at his lifelong obsession with the occult and mystical world.

This talk is about the mystery over the graves, which continues today. What happened during the war? How was the body identified after nearly ten years? Whose bones were brought back by the Irish Naval corvette LÉ Macha, lay in state in Sligo Town Hall and were eventually interred at Drumcliffe?

Though grave-diggers' toil is long,
Sharp their spades,

LOUISE FOXCROFT is an award-winning historian who has specialised in medical perceptions of the human body and at the way these are related to present day, personal, human experience.

She read History at the University of Cambridge and in 2007 published her PhD thesis as The Making of Addiction: The "use and abuse" of opium in nineteenth-century Britain (Ashgate).

Her second book, Hot Flushes, Cold Science: A history of the modern menopause (Granta, 2009), won the Longman/History Today Book of the Year Award 2009 and was commended by the Medical Journalists Association in the Open General Readership Book Award 2010.

Calories and Corsets: A history of dieting over two thousand years, was published by Profile Books in 2012 and her next book was also with Profile, a historical biography, The Irish Pasha: The maverick life of RG 'Pum' Gayer-Anderson Pasha, published in June 2013.

An occasional supervisor at the University of Cambridge, she has also written for The Irish Independent, Times, Independent, Guardian, Daily Mail, London Review of Books, New Scientist Online and New Humanist Magazine, and has appeared on RTE, several BBC Radio prog-rammes and AlJazeera English TV. She regularly speaks to local and university history societies and at literature festivals.

Click here for an introduction to The Irish Pasha : Dr Louise Foxcroft’s next publication 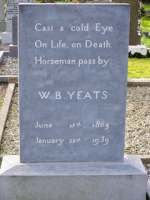 W B Yeats grave at the Church of Saint Columba, Drumcliff, Sligo 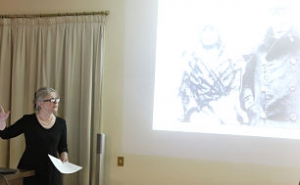 Dr Louise Foxcroft during the lecture