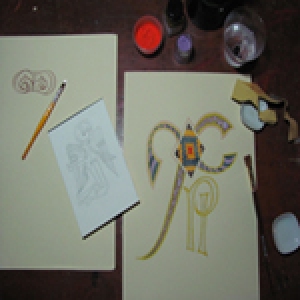 THE HISTORY OF IRISH BOOK ILLUMINATION OF THE GOLDEN AGE

The Trustees of the Princess Grace Irish Library, under the aegis of Fondation Princesse Grace, are immensely grateful to the American Ireland Fund for its generosity resulting in this initiative coming to fruition.

“The American Ireland Fund is delighted to support these workshops exploring some of the most treasured and rare aspects of Irish tradition. Susan Kelly vonMedicus not only brings a wealth of knowledge but a unique personal connection to the legacy of HSH Princess Grace that celebrates the ties between the US and Monaco.”

“The American Ireland Fund’s support of this interdisciplinary study of the Golden Age of Irish manuscript Illumination will allow the time and place to work under the hospitality of a unique institution, the Princess Grace Irish Library.  An extraordinary gift for scholars.  We will endeavor to make the very best of teaching on our subject the outcome of this residency.  I consider it a great honor to be able, in some small way, to continue and strengthen the triangulation, Monaco, Ireland and the United States, which my Aunt Grace forged with her remarkable person, intelligence and, yes, grace.”

Reserved for scholars-in-residence to conduct research in the Princess Grace Irish Library.

LECTURE FOR THE FRIENDS OF THE PRINCESS GRACE IRISH LIBRARY

Irish Illuminated Manuscripts of the Golden Age (600-800 CE): An Overview

An Illustrated Talk by Tina Waldeier Bizzarro, followed by a demonstration of the materials and methods of the period
by Susan Kelly vonMedicus.

A series of lectures and hands-on workshops will take place daily:

Each lecture and workshop will focus on an aspect of Irish Manuscript Illumination. Each student will craft an artwork involving traditional and authentic Irish materials and methods. No artistic experience or talent is necessary.

The Difference between Ireland and the West: An Introduction to Irish Medieval Books

This lecture and discussion will include a careful look at one or two traditional early medieval illuminated books in the western tradition such as the Vatican Vergil and the counter-development, in Ireland, of an entirely different type of page format, as well as a non-narrative and decorative tradition, par excellence.

Some early manuscript books to be examined:

and some early Irish metal and stone-work such as the Moylough Belt Shrine and a gravestone from Clonmacnoise will provide a look at the migration of techniques across mediums.

Collaborative Project: Lettering a Latin Psalm.Page formatting and lettering in the insular script will be presented and practiced. Students will make a page, ink on paper, of a psalm in Latin modelled on the style of the Cathach of Saint Columba.

This lecture and discussion will trace the development of the illuminated Irish page in the earliest of the fully-decorated gospel books — the Book of Durrow (circa 680 CE) — with its full-page Evangelist symbols, its carpet pages and its curvilinear miniscule insular script, hallmarks of the Hibernian tradition.

Collaborative Project: Initium Versal. The colour palette of the period and the mixing of paints will be presented. Students will make a decorated versal monogram on paper, based on the Initium from the Durham fragment, an early use of zoomorph and diminuendo.

A ‘Most Perfect’ Book: The Gospel of Saint Willibrord

This lecture and discussion will have a look at the Gospel Book of Saint Willibrord, also known as the Echternach Gospels (circa 698 CE), called by some the “most perfect” of all medieval Irish illuminated books. Echternach will be compared to examples of Irish metalwork such as the Ardagh Chalice and the Tara Brooch as well as particular Persian manuscripts such as the Diatessaron Codex, in order to understand Ireland’s artistic connection to the East.

Collaborative Project: The structure of knotwork will be introduced and students will make a Cross on true vellum using a 3-colour palette based on knotwork found in the Book of Durrow.

This lecture and discussion will study the mixture of traditions that came together in this book (circa 698 CE), the painterly traditions and techniques of the medieval Irish blended with Mediterranean influences from Byzantium. The artist, Bishop Eadfrith of Lindisfarne, had an Irish mother, saw Byzantine ivories, and was educated at Iona. It is in the Book of Lindisfarne that we arrive at the total spatial conflation and ambivalence between script and decoration which characterized Irish books for the next century.

Collaborative Project: The use of Runic Capitals will be introduced and students will design a work on paper using this script and decorate with rubrication and colour block fills, based on those found in the Lindisfarne Gospel.

“‘The work not of men, but of angels’: The Book of Kells”

This lecture and discussion will deal with many of the 340 leaves/680 illuminated pages of the chef d’oeuvre of Irish medieval book illumination, the Book of Kells (circa 800 CE).  Kells was begun in a Columban monastery on Iona, a tiny island off the southwest coast of Scotland.  Many international scholars have devoted their lives to the study of this most perfect example of Irish workmanship with its unusual zoomorphic (animals) and phyllomorphic (leaves) ornament, its characteristic portrait pages of the Virgin and Child — among others, and its rich palette of colours, borders, and capitals. We will begin to understand and interpret this “chief relic of the Western world.”

Collaborative Project: The use of symbols of the four evangelists will be introduced and students will choose an evangelist to make an illumination using the line drawings from the Book of Kells. Colour work will be done using the palette of the period on paper.

Screening of the Animated Film “The Secret of Kells” with popcorn!

Colouring/Painting of the Animals of Kells, Outline Drawings from the Book of Kells.

For children and adults.

10 students per session, students may register for one or more sessions.

The lectures and workshops from 20 to 25 July inclusive are free of charge.

The schedule is subject to change as the course continues and develops.

Táin Bó Cúailnge (The Cattle Raid of Cooley), complete text in English at:

Susan Kelly vonMedicus was born and raised in Philadelphia, Pennsylvania and educated at the following institutions:

·      Pennsylvania Academy of the Fine Arts

·      The Prosopon School of Iconology

In the mid-1970s, Susan Kelly worked as a preparator (in the vaults) at the Museum of the Pennsylvania Academy of the Fine Arts, a formative experience, literally hands-on immersion in the structure, quality and integrity of masterworks of art. All the while developing her work as a painter, she managed a Fine Art Photography Gallery in Philadelphia in the early 1980s, making light a central theme to her work.

In 1990, she undertook the study of traditional methods of iconography, apprenticing under master iconographer Vladislav Andrejev. Susan continues to study, work and teach in his Prosopon School of Iconology, making icons using the ancient technique of egg tempera and gold leaf on panel.

Currently, she is adjunct faculty member at Villanova University teaching Calligraphy in the Studio Art department, developing the course to include the practice of letterforms and study of text based art.

Susan spent the winter of 2013 as artist-in-residence at the Burren College of Art in Ballyvaughn, County Clare, Ireland. The time was spent exploring the creative process through new techniques and applying those already mastered to new forms.

Susan’s connections to Ireland are in her family heritage coming out of Newport, County Mayo, from where her great-grandparents emigrated to the US and where cousins remain in close contact with the family members who left the west coast of Ireland those 150 years ago. Visits to Ireland over the years, including accompanying her cousin His Serene Highness Prince Albert II of Monaco on His State Visit there in 2011, have informed her study of the art and culture of Ireland and how it can be integrated into her art making today.

In 2000 a book of her illuminations, Letters from Heaven, an Illuminated Alphabet was published by Conciliar Press of Ben Lomond, California. Susan has reviewed books for Living Church magazine and has done commissioned artwork for two musical recordings.

Susan’s work is in public and private collections internationally; recent commissions include an icon of St. Patrick made for Taoiseach Enda Kenny and an icon of Christ Emmanuel for the Cathedral of St. Nicholas in Monaco to celebrate the 700th anniversary of the Archdiocese. To be able to contribute to the continuity of the triangular connection, Ireland, Monaco and the United States forged by her aunt, Princess Grace, is enormously satisfying and a great honour and privilege.

Susan accepts commissions, exhibits, teaches workshops and lectures. The mother of three sons, she lives and works in the Philadelphia area creating artwork and keeping a garden, chickens and bees.

Tina Waldeier Bizzarro is a Full Professor in the Department of History of Art at Rosemont College in Rosemont, Pennsylvania (USA) as well as an Adjunct Instructor in the Irish Studies Department at Villanova University in Villanova, Pennsylvania (USA). At Rosemont, she has been awarded Pew Grants and Connelly Grants for scholarly development, as well as the Lindback Distinguished Teacher’s Award in 2007.

Prof. Bizzarro earned her PhD from Bryn Mawr College in History of Art, where she was the Howard Lehman Goodhart Fellow in Medieval Studies from 1978 through 1982 as well as the recipient of several Kress Fellowships during her tenure at Bryn Mawr College. Before that, she earned a BA in French and Italian Language and Literatures, from the University of Pittsburgh, having spent two years at Hamilton College in Clinton, NY. She was elected to “Phi Beta Kappa,” America’s oldest and most widely-known Honors Society as an undergraduate scholar.

She spent six months as a Fulbright Scholar in Sicily in 2006, where she photographed and researched the roadside shrines, or edicole, which dot the countryside of southern Italy. Her Fulbright project and the title of her publication of this material will be “Wayside Warriors: The Roadside Shrines of Sicily.” Her love of that hot, mysterious island led her to inaugurate, develop, and teach in her Summer Studies Program in Messina, Sicily. This program ran for six summers (2000-2006), offering courses in history of art, studio art, anthropology, and history. She received a National Endowment for the Humanities Summer Travel Stipend in 1997 for her project, “French Medieval Architectural Criticism: From the Restoration through the Third Republic.” She has served on peer review committees for the Fulbright Commission and for the National Endowment for the Humanities.

Prof. Bizzarro’s specialty is architectural history. She has published, Romanesque Architectural Criticism: A Prehistory with Cambridge University Press, a history of the reception of medieval architecture from the fifteenth through the early nineteenth century. She is working on a pendant volume to this which will cover medieval architectural criticism from 1820 through 1914. She has also published on medieval architectural revivals or medievalism, in a lengthy article entitled “‘The Scattered Limbs of the Giant’: Recollecting Medieval Architectural Revivals” which appeared in A Companion to Medieval Art: Romanesque and Gothic in Northern Europe, with Blackwell Press of Oxford University. A lecture that she gave in March 2006 at the University of Messina in Sicily, entitled, “Icon: Meaning and Making” was published in the Atti del Istituto dei Peloritaniat the University of Messina. She has also written book reviews and many architectural biographies for the Macmillan Encyclopaedia of Architects. For the past 10 years, she has been working on Sicilian performative ritual and visual culture, researching the Sicilian performative visual culture of feste and roadside shrines. She is active on the scholarly lecture circuit in the U.S.

Her interest in and love of Ireland’s visual culture stems from her graduate school days when she began to develop courses on Ireland for Villanova University. Since then, she has regularly taught “The Art of Ireland” in Villanova’s Irish Studies Program. She has taken many student groups to Ireland to study and experience Ireland’s visual culture, from the Stone Age through the Middle Ages. Ireland has been a passion for her for most of her academic life. 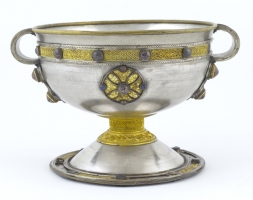 Animals from "The Secret of Kells"
×