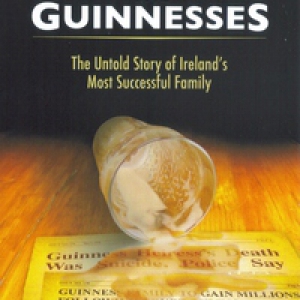 There is no doubt that the Guinness name continues to intrigue and fascinate the public. Joe Joyce’s talk on the illustrious Irish family – big in brewing and business – was a resounding success. Below, he resumes 250 years of the Guinness family history.

Arthur Guinness arrived in Dublin in the late 1750s, took over a disused brewery, established a successful business and developed a distinctive brand which his descendants oversaw for the next seven generations, up to the end of the 20th century.

There was nothing inevitable or pre-ordained about his and his family's success. Arthur Guinness did not invent porter, the black beer which became synonymous with their name. Eighteenth century Dublin was no place for the faint of heart, something of a Wild West-style town, attracting adventurers, chancers, and entrepreneurs.

Guinness and his descendants battled their way through a crowded field of brewers, overcoming the competition and periodic recessions, surviving financial and sexual scandals, and following an astute course through Ireland's turbulent politics. As a result, the Guinness brewery became the world's largest in the 1870s and began to spread its brand around the globe.

Its launch on the London stock market was so successful in the 1880s, in spite of an insider-trading scandal, that it made Edward Guinness — the first Lord Iveagh — one of the three richest men in the United Kingdom at the turn of the 20th century, making the family almost as famous for its wealth as for its porter and allowing it to earn a well-deserved reputation for philanthropy.

That proved to be the family's apogee. While the family moved in aristocratic circles and lived mainly in England, the Dublin company began a slow decline throughout the 20th century, masked for decades by its wealth and strength. Plagued by deaths — premature, accidental, and deliberate — and by occasional scandals, it all came to a head under the stewardship of the third Earl of Iveagh, Benjamin Guinness.

A shy man, not particularly interested in brewing or business, he found himself by accidents of history and birth trying to halt a decline created by changing drink habits which saw blonde lagers rise as dark beers declined. A final share-rigging scandal in the late 1980s, in which the family was not directly involved, marked the end of its control of the company.  But the Guinness brand lives on as part of Diageo, one of the world's largest drinks company.