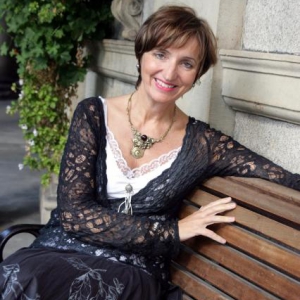 An Illustrated Talk by Una Hunt, Concert Pianist and Broadcaster

Dr Una Hunt, one of Ireland’s leading concert pianists, has often performed concerti with the RTÉ National Symphony Orchestra of Ireland, the RTÉ Concert Orchestra, the Ulster Orchestra and the Irish Chamber Orchestra. She has played recital programmes in Britain, Ireland, Russia and the USA and tours throughout Europe and the USA with her violinist sister Fionnuala. Una has appeared in concert and on television with notable international soloists including flautists James Galway and violist Bruno Giuranna, and is a founder member of several prominent chamber music groups in Ireland.

She is also an experienced vocal and chamber music coach and has taught at many of Ireland’s musical academies including CIT Cork School of Music, DIT Conservatory of Music and Drama, University of Limerick World Academy of Music and Dance, and the Ulster College of Music. She has also given master classes at home and abroad including the UK, USA, France and Switzerland. This autumn, Una will curate and perform The Thomas Moore Songbook for Wexford Festival Opera.

Taking an active interest in the music of Irish composers has led to an unrivalled discography of ground-breaking world-premiere recordings. These include Irish Fantasy (Continuum, 1992), The Music of Joan Trimble (Naxos/Marco Polo, 1999), Complete Piano Music of E. J. Moeran (ASV/Sanctuary, 2003), Fallen Leaves from an Irish Album (RTÉ Lyric FM, 2006) and My Gentle Harp, the complete collection of Moore’s Irish Melodies (six CD box set) and the Square Piano Recordings of selected Irish Melodies (both Thomas Moore Festival Recordings, 2008 and 2009). In 2012, a CD of the music of William Vincent Wallace was released as a companion to the facsimile publication of his 1854 American Album.

Since 2007, Una has devised and co-ordinated a significant diary of events in celebration of two hundred years since the first publication of Moore’s Irish Melodies. These include a national competition for young singers at the National Concert Hall, a documentary series for RTÉ Lyric FM, a multi-media exhibition viewed to date by 100,000 visitors, and the largest touring concert series of its kind ever mounted in Ireland. In 2010, she presented Moore’s Irish Melodies at Carnegie Hall, New York, where the group received two standing ovations. A performance was given the following year in Russia to mark the unveiling of a sculpture honouring Moore at the University of St Petersburg.

Una Hunt is extremely active in music research, and has a particular interest and expertise in the musical culture of Ireland. She is a major contributor to the Encyclopaedia of Music in Ireland (Dublin: UCD Press, 2013) and is a member of the Society of Musicology in Ireland. Una has published widely including a chapter on Moore in: Texts, Contexts, Hypertexts (Oxford: Peter Lang Press, 2013) and another forthcoming in Thomas Moore and Romantic Inspiration (Routledge, 2017). Her recently-published book, Sources and Style in Moore’s Irish Melodies (Routledge, 2017) presents the first stdy of Moore’s Irish Melodies from a combined musical and literary standpoint.

As the first scholar in Ireland to complete a PhD in Performance (NUIM, 2005), Una’s thesis acknowledges and provides a detailed study of the musical contribution made by one of Ireland's foremost pianist-composers, George Alexander Osborne (1806-1893), who spent an extended period in Paris and performed with Frederic Chopin at his debut recital in the Salle Pleyel. Una recorded the first CD devoted to Osborne’s music, Shower of Pearls, the Music of George Alexander Osborne (RTÉ Lyric FM, 2004).

As music consultant to the National Library of Ireland, Una spearheaded developments with the Music Library Project creating greater access to the music collections. She led the establishment of the National Archive of Irish Composers, the first digital online collection of historic music from the National Library – http://naic.dmc.dit.ie/ - and was Artistic Director of the Musical Reflections concert series at the Library. Gems of Irish Opera was presented in 2008, showcasing The Sleeping Queen, an unknown operetta by Michael William Balfe to mark the composer’s bicentenary. During her period as music consultant to the National Library, Una made a detailed study of the music holdings and a biographical listing of all Irish composers in the collections.

She is an experienced and active broadcaster and producer and has completed numerous documentaries for RTÉ. Among recent programmes for RTÉ Lyric FM are: The Snow is Dancing, a 150th year birthday tribute to Claude Debussy; The Road to Maritana, a three-part bicentenary series on Irish opera composer, William Vincent Wallace; Piano Portrait - Fanny Robinson, on an unknown female pianist-composer from nineteenth-century Ireland; and A Musical Calendar of Irish Saints, showcasing the music associated with the mediaeval church. The Wild Irish Girl and her Harp, a portrait of harpist, composer and writer, Sydney Owenson (Lady Morgan) was nominated for a Celtic Media Award.

Thomas Moore And The Irish Melodies

The poet of all circles and the idol of his own…

These are the words of Lord Byron, inscribed on the tall Celtic cross erected on Thomas Moore’s grave, in Bromham churchyard, one hundred years ago.  Thomas Moore wrote a biography of Byron, his close friend and companion, and Byron adored the Irish Melodies.

He told Moore ‘I have them by heart … they are my matins and my vespers.’  Although he moved easily in privileged circles, Moore was also genuinely loved by the people of Ireland where he was described as ‘the true hearted Irishman.’  As one of the most famous Irishmen of his day, he was also regarded as Ireland’s national poet, his fame sealed by the success of his Irish Melodies.

Ten volumes of Irish Melodies totalling 124 songs, were published in London and Dublin between 1808 and 1834 by the publishers James and William Power. Their immediate appeal to the public was enhanced by the music that Moore chose for his poetry with airs drawn largely from anthologies of ancient harp music, particularly the collections of Edward Bunting, first published after the Belfast Harp Festival in 1792. Taking on a new life, the songs brought the ancient music of Ireland before a global audience for the first time and were acclaimed both for the beauty of their melodies and their symbolic significance.

Throughout one of Ireland’s darkest periods Moore’s Irish Melodies were a source of national pride, reflecting many aspects of national identity, from gentle love of country to revolution.  Not content with confining themselves to these shores, the political songs went round the world and later became symbolic rallying cries in Poland, Hungary, Russia and Cuba. Within the body of songs, the harp appears with frequency as a symbol of Ireland’s cultural past.

Accompaniments for the first eight volumes were provided by Moore’s friend, Sir John Stevenson, a prominent figure in Dublin musical life.  His partnership with Moore brought him further celebrity but, as soon as the Irish Melodies began to appear, controversy surrounded the piano arrangements.  They were considered to be too elaborate and out-of-step with the simple beauty of the airs, and some critics accused Moore of stealing Bunting’s thunder.  When the Power Brothers fell out, William stopped publishing the Melodies in Dublin, and the last volumes were issued only by James Power in London, with accompaniments by Henry Rowley Bishop.  For this reason, the audio archive documents both versions of Volume no. 8 with accompaniments by both composers.

Despite Moore’s celebrity, the instant popularity of the Irish Melodies, and their influence in both musical and literary circles, only a handful are known today, and this world premiere collection provides the first complete recorded archive of the songs.  The opera composer, Michael William Balfe, born in 1808, the same year as the publication of the first volume of the Irish Melodies, published new accompaniments to the songs in 1859 and these have been used for the first seven volumes (1808‑1818).  However, the song ‘After the battle’ does not appear in Balfe’s collection and was included in Stevenson’s publication only as a harmonised part song, so an accompaniment by Charles Villiers Stanford (1895) has been used for the recording.  The original Stevenson and Bishop accompaniments are performed from Volumes no.8 (1821), no.9 (1824) and no.10 with supplement (1834) and throughout the entire collection the titles of the airs have been listed with each of the songs according to the indexes of Moore’s original publications, even though several of these are known to be inaccurate.

This recording collection will be made available with accompanying facsimiles of the sheet music and other related material on the Thomas Moore Hypermedia Archive: www.thomasmoore.ie, a scholarly resource presently being assembled at NUI Galway. The archive aims to publish a comprehensive collection of all of Moore’s works to be available free on the internet.

This archive recording collection has been made possible through the generous support of the Department of Arts, Sport and Tourism, the Broadcasting Commission of Ireland, RTÉ Lyric FM, the Thomas Moore Hypermedia Archive and the Conservatory of Music and Drama at Dublin Institute of Technology. 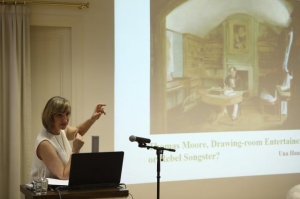 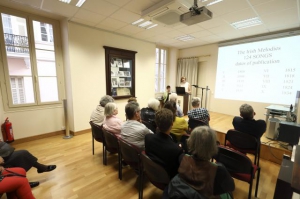 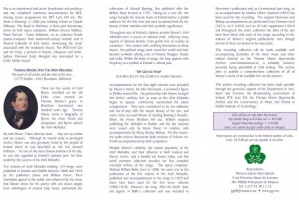 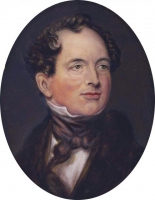