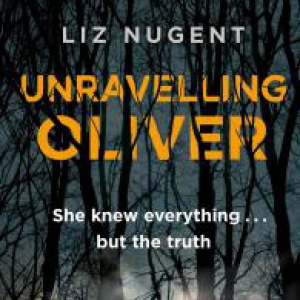 Born in Dublin in 1967, Liz Nugent spent many years as a stage manager, including a stint with Riverdance in the late 1990s. She worked as a Production Coordinator for television game shows and sitcoms and as a jury selector for the Irish Film and Television Academy Awards.

Liz also wrote independently, short pieces for Sunday Miscellany, or the Fiction 15 radio series for children. She wrote a five-part animation series for TG4 and a full-length radio play.

In addition to winning a TG4 television play competition and a European Broadcasting Union competition for a TV pilot, Liz won the Best Crime Novel award for Unravelling Oliver at the BGE Irish Book Awards in November 2014.

Oliver Ryan is a handsome and charismatic success story. He lives a life of enviable privilege and ease with his wife Alice. Enviable until, one evening after dinner, Oliver attacks Alice so viciously that he beats her into a coma. Oliver is stunned by his own actions.

In the aftermath, as everyone tries to make sense of his astonishing act of savagery, he tells his story. So do those whose paths he has crossed over five decades.

What unfolds is both tragic and monstrous, a story of shame, envy, breath-taking deception and masterful manipulation.

Only Oliver knows what he had to do to get the life he craved, and to which he felt entitled. But even he is in for a shock when the past finally catches up with him.

Cash only. Sorry, no credit cards. You may reserve your book(s) in advance.

Free copies on a first-come first-served basis. With thanks to Béatrice Duval, Directrice, Editions Denoël.