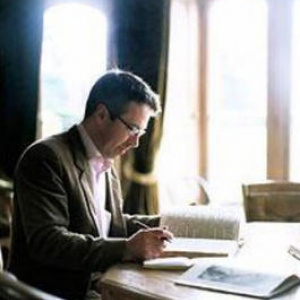 TURTLE BUNBURY is a best-selling author, award-winning travel writer and historian based in Ireland.

In February 2010, Turtle gave a presentation at the Princess Grace Irish Library — 'Around the World in 1847: Events across the globe in which people of Ireland were influential'. Thanks to the unfailing generosity of the Ireland Fund of Monaco, we are delighted to welcome him back as Writer-in-Residence.

As a writer, Turtle is probably best known for his work on the 'Vanishing Ireland' series. His next book 'Vanishing Ireland - Recollections of Our Changing Times' will be launched in October 2011... just after he finishes his residency at the Princess Grace Irish Library.

The first two volumes of the 'Vanishing Ireland' series, with photographer James Fennell, were shortlisted for the Best Irish-Published Book of the Year Awards in 2007 and 2010.

Turtle was one of the co-presenters on a new four-part series, the 'Genealogy Roadshow' which aired on Ireland's RTE1 television channel in August and September 2011. He also lent his historical expertise to the 'Who Do You Think You Are?' series and 'Wogan's Ireland' where he pondered the drunkeness of the Jacobite troops at the battle of the Boyne with Sir Terry Wogan.

Turtle is also the founder of 'Your History in a Book', creating thoroughly researched and handsomely illustrated family histories, presented as leather- bound books.

Turtle was born in 1972 and raised on the family estate at Lisnavagh, Rathvilly, County Carlow, Ireland. From 1980 to 1985, he was at Glenalmond College in the Scottish Highlands where he secured the necessary results at A-Level to read law at Trinity College Dublin.

Turtle went travelling for a year in the USA, Australia and south-east Asia, before taking his place at Trinity. However, the law did not suit him and in 1994 he merrily transferred to history. He graduated from Trinity with a BA in 1996.

He then moved to Hong Kong where he spent three years working as a freelance correspondent. During this time he also experienced an extraordinary period of history while attempting to establish a guesthouse in Cambodia in the same month that Pol Pot was captured.

Since his return to Ireland, Turtle has established himself as one of the most prolific and energetic writers in the country. As well as his nine published books, he continues to travel extensively throughout the world. His work on Sri Lanka earned him the award for Ireland's Longhaul Travel Journalist of the Year in 2006.

As a feature writer his work has been published in newspapers and magazines as diverse as The Financial Times, The New York Post, The Irish Times, The Australian, The Guardian, Vogue Living, Playboy and The World of Interiors.

Turtle lives beside an ancient ringfort in County Carlow with his wife Ally and their two toddling daughters Jemima and Bay.