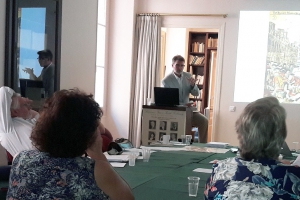 EIGHTEENTH-CENTURY IRELAND IS THE THEME OF THE BIENNIAL AUTUMN SYMPOSIUM AT THE PRINCESS GRACE IRISH LIBRARY, MONACO

The Keough Naughton Institute for Irish Studies (University of Notre Dame, Indiana, USA) and the Princess Grace Irish Library (placed under the aegis of Fondation Princesse Grace in Monaco) are pleased to announce their second joint symposium: "Eighteenth-Century Ireland" to be held at the Library from 19 to 21 October 2018. The Symposium is not open to the public.

The Fellows of the Keough-Naughton Institute at the University of Notre Dame value this opportunity to collaborate with a highly-revered resource for the study of the global Irish culture. We look forward to continuing to build our relationship.

The Trustees of the Princess Grace Irish Library — Mark Armstrong, Anne-Marie Boisbouvier, Francis O'Hara and Peter K Murphy — are delighted to welcome academics with such global scope to discuss a century seminal to the later development of Ireland, its tensions and divisions.

The Symposium brings an interdisciplinary group of leading scholars together to explore our current understanding of Eighteenth-Century Ireland. This remains a seminal and highly-contested period, when Ireland moved from a kingdom to colony, to union, and empire. It was a time that witnessed the beginning of the great migration of Irish people to the Americas. It was also a time when Dublin itself moved from a medieval town to the second city of the empire and an era that witnessed a flowering of the arts and a massive upheaval on political, social, military and economic fronts.

As 2018 Symposium member Ian McBride notes, once "regarded as quiet backwater, the eighteenth century has become the new boomtown of Irish historiography." In fact, where "historians once described a century of tranquility, they now focus on deep-seated tensions—between Protestant, Catholic and Dissenter, settler and native, landlord and tenant—all culminating in the explosion of 1798." He adds that these "were years when the penal laws were implemented and the threat of a Jacobite invasion a real one, years when the famine of 1740-41 left 15 percent of the population dead."

The "old tension-free model" in the study of Eighteenth-Century Ireland has then (as Professor McBride argues) been challenged by newer work that shows that "social and political stability of the period was a 'façade', masking the reality of a deeply divided society, and the 1798 rebellion presents the inevitable product of a 'politico-religious' tensions which had been simmering for one hundred years."

Symposium member Thomas Bartlett would add that the "period 1691 to 1830, Ireland's 'long' eighteenth century, has traditionally posed a challenge to those historians who have sought first to establish and then to elaborate the main themes that make the most sense of it. Relatively benign developments—at least until the 1770s—of vibrant political activity, impressive economic advance and splendid flowering of art and architecture have jostled uncomfortably, especially for the later decades with, in the debit column, the much more malign notes of political failure, bloody insurrection, savage repression, rampant sectarian conflict and, in the early nineteenth century, increasing immiseration. Where is the balance to be struck between such apparently opposed viewpoints? And what is the connection between the splendour and the squalor, the poise and the poverty, and the self-assurance and the self-doubt, all of which seem in equal measure to characterize what has been styled both a 'golden age' and a 'penal era'?"

These and other issues will animate a lively PGIL discussion involving distinguished historians, linguists, and scholars of literature and folklore. How did the Gaelic Irish see themselves during a particularly repressive period and define their relation to issues of sovereignty and nation? What was the popular Gaelic tradition's connection to learned Gaelic traditions and what can this tell us about eighteenth-century Ireland? What was the connection between gender and the popular oral culture? In the Anglo-Irish tradition, how do we connect Swift's classic, Gulliver's Travels, with its place and time? How did the Irish respond to growing urbanization between 1650 and 1800? What were the connections between the lively poetic and musical cultures in eighteenth-century Dublin? How did the Catholic Church survive, function and even flourish during the penal law period? How did the experience of travel affect eighteenth-century understandings of Ireland's colonial position? How do we characterize Ireland's connections to the larger Atlantic trading system? Finally, how does the nearly constant experience of global war affect Irish culture, perspectives and lives?

The Symposium will offer a splendid table for open discussion of these and other questions.